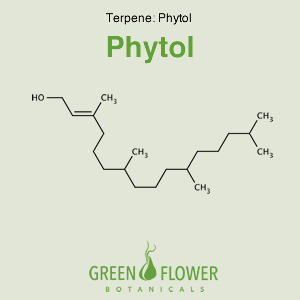 Phytol is the product of chlorophyll metabolism in plants. It is chemically called an acrylic diterpene alcohol which is used in the manufacture of Vitamin E and K which are important in the many functions of the human body.  The use of phytol in the human body is indispensable, it is essential in activating enzymes that have a positive effect on the production of insulin. It can also be effective in the decrease of blood cholesterol levels. Phytol has been researched for its anti-cancer properties with effects on both Gastric Adenocarcinoma Cells (AGS) and Glioblastomas. As well, phytol possesses promising antischistosomal properties. Schistosomiasis is a major endemic disease that affects hundreds of millions worldwide. Phytol has shown great promise for the treatment and control of this parasitic disease.

Schistosomiasis is a major endemic disease that affects hundreds of millions worldwide. Since the treatment and control of this parasitic disease rely on a single drug, praziquantel, it is imperative that new effective drugs are developed. Here, we report that phytol, a diterpene alcohol from chlorophyll widely used as a food additive and in medicinal fields, possesses promising antischistosomal properties in vitro and in a mouse model of schistosomiasis mansoni.
Phytol, a Diterpene Alcohol from Chlorophyll, as a Drug against Neglected Tropical Disease Schistosomiasis Mansoni

Phytol, a diterpene alcohol produced from chlorophyll, is used widely as a food additive and an aromatic ingredient. However, the molecular mechanisms behind the cytotoxic effects of phytol in cancer cells are not understood. The current study demonstrated that phytol induces apoptosis in human gastric adenocarcinoma AGS cells.

Glioblastoma (GBM) is the most common primary brain tumor. Genetic mutations may reprogram the metabolism of neoplastic cells. Particularly, alterations in cholesterol and fatty acid biosynthetic pathways may favor biomass synthesis and resistance to therapy. Therefore, compounds that interfere with those pathways, such as phytol (PHY) and retinol (RET), may be appropriate for cytotoxic approaches.
Toxic effects of phytol and retinol on human glioblastoma cells are associated with modulation of cholesterol and fatty acid biosynthetic pathways.

This study concluded that the insulin sensitizing/anti-diabetic effect of phytol is mediated by partly from activation of nuclear receptors and heterodimerization of RXR with PPARγ by phytanic acid.
Phytol/Phytanic Acid and Insulin Resistance: Potential Role of Phytanic Acid Proven by Docking Simulation and Modulation of Biochemical Alterations