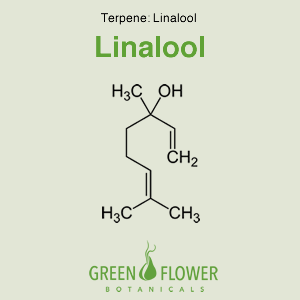 Linalool is a naturally occurring terpene alcohol chemical found in many flowers and spice plants. Linalool is able to act on the opioidergic and cholinergic systems to relieve pain. Linalool also acts as an anticonvulsant, having similar effects to diazepam. Linalool has been used as a relaxant and as a treatment for anxiety for thousands of years. In scientific studies, linalool was proven to sedate mice and also mitigate anxiety.

Linalool was able to reduce carrageenin-induced edema in rats, a classic model of inflammation. It’s acetate version was noted to have the same effect as well

In mice exposed to acetic acid-induced writhing response and the hot plate test, linalool was able to act on the opioidergic and cholinergic systems in a manner to prevent neural networks from transmitting the signal of pain.

Linalool was eluted to possess pharmacological activity close to that of diazepam. In a PTZ model, PIC seizure mode, and tonic convulsions induced by transcorneal electroshock, linalool therapeutically decreased the convulsion time in mice

In an elevated plus maze test, linalool indicated to modulate motor movements and locomotion. At a high enough dose, linalool was able to make the mice go to sleep.

Linalool was shown to possess anxiolytic properties without any side effects, showing promising potential use in treatment of anxiety disorders. Linalool was evaluated on 4-week ICR mice using an open field test, a light-dark test and an elevated plus maze test. The measurements of monoamines in the brain showed decreased serotonin, dopamine, and norepinephrine, which is commonly seen in animal models exhibiting anxiolytic effects.