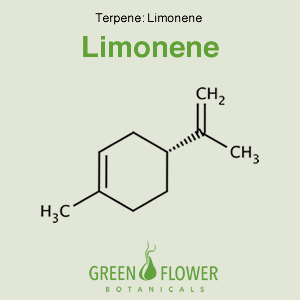 Limonene is a clear, colorless liquid hydrocarbon classified as a cyclic monoterpene. Limonene has been shown to be a potent antidepressant and anti-anxiety treatment comparable to some traditional medicines. Limonene has also been inferred to be an anti-inflammatory, lowering or preventing key stages in the reaction. Limonene was elucidated in being a potential treatment for breast, prostate and pancreatic cancer.

Limonene has been attributed to induction of phase I and phase II enzymes that result in carcinogen detoxification. In two prostate cancer cell lines, limonene administration resulted in higher ROS generation, depletion of GSH, accompanied by increased caspase. In addition limonene results in differentiation of cancer cells as well. Breast and pancreatic cancer cell lines were also negatively affected.