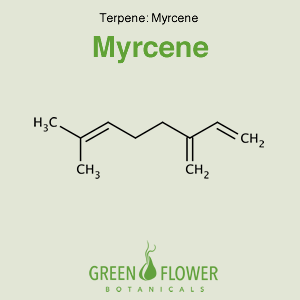 Myrcene is classified as a monoterpene. Monoterpenes are dimers of isoprenoid precursors, and myrcene is a significant component of the essential oil of several plants, including bay, cannabis, ylang-ylang, wild thyme, parsley, cardamom, and hops. Myrcene is thought to help compounds enter cells through enhancing membrane permeation. Myrcene has been shown to be an analgesic in mice and did not cause tolerance to the effect. Ther terpene is also noted to have antioxidant effects with mutagenic compounds. Other benefits to myrcene include its ability to relax muscles and induce sleep.

Oral administration of myrcene in rats was concluded to produce a dose-dependent pain relief for the hyperalgesia induced by subplantar injections of either carrageenin or prostaglandin E2, but did not affect that induced by dibutyryl cyclic AMP. These results indicated a peripheral site of action. In contrast to the central analgesic effect of morphine, myrcene did not cause tolerance on repeated dosing in rats. Myrcene shows promise as a lead for the development of new peripheral pain killers with a different method of action than aspirin-like drugs.

Myrcene was explored as a sedative in the mouse model. Muscle relaxation was seen as observed through the rota rod test. In addition there was an increase in sleeping time by 2.6x.

Myrcene was eluted to block the metabolic activation of some promutagens (e.g., cyclophosphamide and aflatoxin B1) in in vitro genotoxicity assays. The effects of myrcene was evaluated through the activity of liver microsomes. A concentration-dependent competitive inhibition was observed for pentoxyresorufin -O-depenthylase activity, a selective marker for a cytochrome p450. The potent inhibitory effects on the cytochrome p450 suggest that myrcene, could also interfere with the metabolism of xenobiotics, which are substrates for this isoenzyme