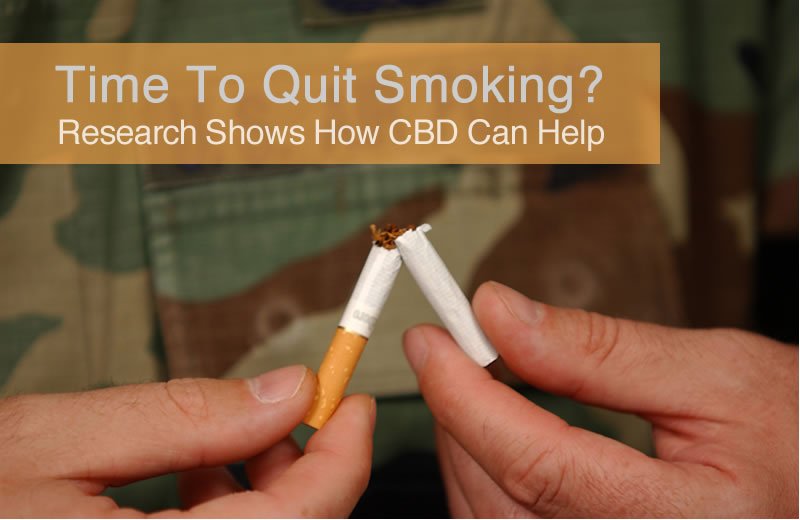 Scientists estimate that with every smoked cigarette, an individual reduces their life expectancy by 11 minutes. Smoking cigarettes is currently the number one cause of preventable death in the whole world. This is because it leads to cancer, pulmonary and heart disease. Recent research shows that cannabis contains compounds that could help you stop this lethal habit.

Thanks to an extremely complex marketing system over the years, millions of people are now daily cigarette smokers, quietly digging themselves into an early grave. Cigarettes contain over 400 different compounds, including nicotine. When inhaled, these compounds, mostly nicotine, make your brain release dopamine, a feel-good chemical in your brain. The euphoric feeling is what smokers get addicted to. Research now shows that addiction to nicotine has a direct correlation to the newly discovered endocannabinoid system. In this article, we will look at the research supporting the use of CBD to quit nicotine addiction.

CBD stands for cannabidiol, one of the main chemicals found in cannabis. The other major compound, tetrahydrocannabinol (THC), is known for its psychoactive effects when inhaled. CBD, on the contrary, does not have any of the psychotropic effects, and has garnered a lot of interest in the recent years for its therapeutic effects.

When you abuse nicotine, it interferes with the brain’s ability to create dopamine naturally, and instead, the chemical only gets released during smoking. This is called re-consolidation, where the brain associates releasing stress with smoking nicotine. As a result, whenever your stress levels become elevated, the need to consume nicotine becomes unbearable. That is why you will notice smokers taking more breaks during work, after a meal or when drinking alcohol. It is this relationship that makes quitting cigarettes so difficult, since our actions have made the brain convinced that a cigarette must be part of the ingredients for having a good time.

Secondly, smoking is generally a health hazard since besides its toxic constituents, our lungs did not evolve to consume smoke. When you light a cigarette, the smoke reaching your lungs is so hot that it cannot be directly absorbed by the lungs, leading to a plethora of chronic health issues, including pneumonia and lung cancer.

How CBD helps in quitting smoking

A recent study published in the Addictive Behaviors Journal from the University College in London now shows that using CBD oil can help nicotine addicts quit the habit, or at least reduce the number of cigarettes smoked per day. The research further bolstered the role the endocannabinoid system plays in terms of nicotine addiction.

The researchers conducted a pilot, randomized, double blind placebo controlled investigation in order to investigate the impact of using CBD in smokers who wished to stop the habit. The study involved 24 subjects who were divided into two equal groups. One group was given a placebo and the rest consumed CBD oil using an inhaler every time they felt the urge for a cigarette.

During the week in which the study was carried out, it was noted that those who took CBD oil reduced the number of cigarettes smoked by a whopping 40%. During a follow-up, researchers established that CBD’s effects still manifested in the treated patients. Following these results, it was concluded that CBD can be a potential treatment for treating cigarette addiction and it calls for more research.

According to Dr. Morgan, one of the lead scientists in the study, 40% was more than expected. Nonetheless, it is difficult to compare the results of the study with other treatments of nicotine addiction since the subjects were not asked to quit smoking totally, but to inhale CBD whenever they felt the urge. There are lots of therapies that can help smokers quit, however, none of them is totally effective and researchers are always on the look-out for something new. CBD is proving to be one of the strongest candidates.

The endocannabinoid system has been largely associated with the regulation of a wide variety of processes in the body, including memory, mood and other cognitive function. As we speak, scientists do not completely understand entirely how CBD and addiction works. However, research suggests that through activation of CB1 receptors, which are found throughout the endocannabinoid system, CBD oil is able to alter the body’s reward system which controls the release of feel-good hormones such as dopamine. As mentioned above, nicotine addiction is fueled by memory habits such as seeing someone else smoke or when undergoing some form of stress, in a process called re-consolidation. It is believed that CBD oil is able to return things to normal by reversing the process.

In another study carried out at the Montreal University in Quebec, researchers looked at 14 different studies, 5 of which were carried on humans and the rest on animals. The study’s objective was to investigate the impact of CBD on addiction to many different drugs including nicotine, alcohol, heroin etc. It was concluded that CBD can be an effective treatment for nicotine as well as other drug addictions.

If you are a cigarette addict, or have ever been one, you understand how difficult it is to drop the habits of a regular smoker. Millions of people are struggling with this dangerous behavior, if you are one of them, all hope is not lost. In addition to a strong will to kick the habit, you can make one more addition to your arsenal by getting a CBD vaporizer and trying some CBD oil for yourself.

As compared to other methods of taking CBD oil such as ingesting, using a vaporizer is able to trick your mind into thinking that you are actually smoking. This is because by vaping, you are going through the exact same motions that you have already associated with smoking, and which make up the overall feel-good effect. This is in large part what every smoker is addicted to – that daily ritual. By vaping, you create the same ritual but only get the good stuff. Vapor is different than the harsh smoke created by burning. A vaporizer will heat the CBD oil at very low temperatures creating a pleasant vapor that is both gentle and flavorful.