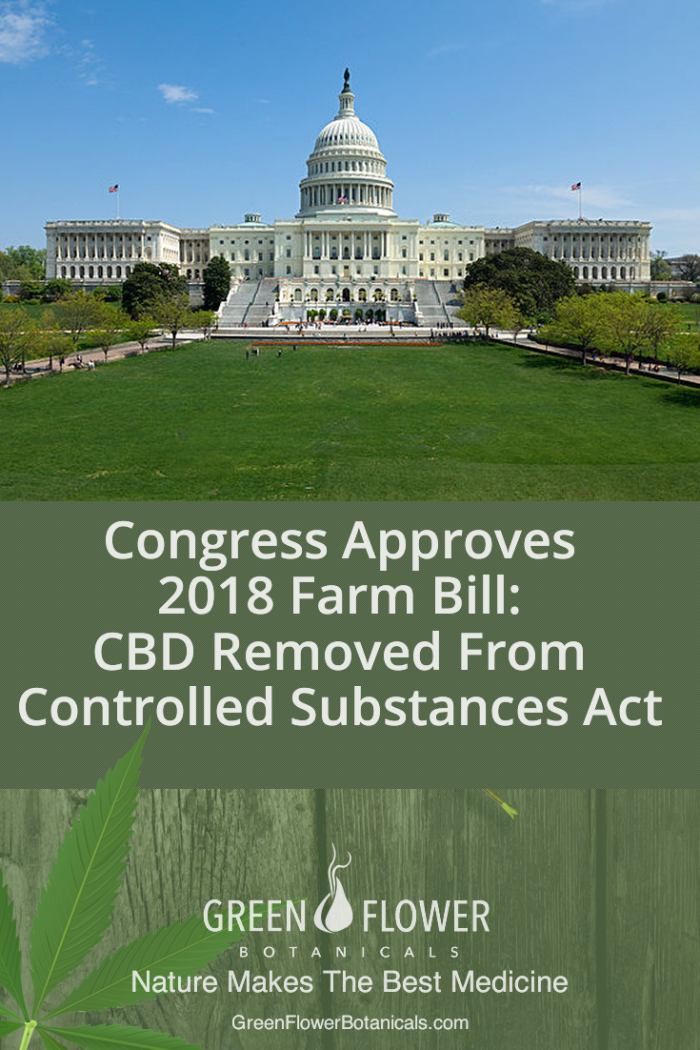 On Wednesday 12th December 2018, Congress agreed on the final version of the 2018 Farm Bill which is expected to be signed into law by President Donald Trump. The Farm Bill incorporates important agricultural and nutritional policy extensions for the next five to ten years. Of all these, the most interesting developments revolve around the cannabis plant.

Normally, when discussing topics such as farm subsidies, crop insurance and nutritional assistance in any level of government, cannabis is never included as part of the conversation. However, things have changed this year after Senate Majority Leader Mitch McConnell strongly supported the hemp debate and encouraged its discussions. After this legislative nod, cannabidiol (CBD), one of hemp’s extracts will be legal at the federal level.

In the new legislation, hemp is defined as part of the cannabis plant species (yes, the same plant that produces marijuana) with one major difference: hemp cannot have more than 0.3% THC. THC is the psychoactive compound responsible for getting people high). In other words, hemp cannot get you high.

For decades, the Federal government did not recognize this difference between hemp and other cannabis plants all of which were illegalized in 1937 under the Marihuana Tax Act. They were made formally illegal in 1970 under the Controlled Substances Act and classified as Schedule I drugs, same as heroine and LSD. These are drugs that have no known medicinal value with high chances of abuse and addiction.

Although CBD consumers have been able to access CBD products in all of the states where CBD is permitted, the question of whether it was Federally legal or not has always been a grey area due to this scheduling.

With the passing of the Farm Bill, consumers can now access CBD freely via various products infused with the substance. In the same breath, the number of CBD products hitting retail shelves is bound to rise in the next few months.

That being said, hemp is still treated as a controlled crop, and there are some strings attached to how CBD will be produced, transported and consumed. We will cover all this information in the sections below.

As a whole, the Farm Bill is a detailed package containing various agricultural programs that are expected to cost in excess of $876 billion in 10 years. This document touches on pretty much every aspect concerned with farming and food production in the U.S.

In the case of hemp, the bill allows each State to formulate its own laws of whether the sale and transportation of CBD is authorized within its borders or not. Also by changing the Controlled Substances Act such that it does not include hemp, the Hemp Farming Bill introduced by Senator McConnell effectively removes CBD extracted from hemp from the DEA’s list of illegal substances.

By removing CBD from the DEA’s list, CBD companies will be able to transport the product across state lines which will allow for interstate commerce and synergy. This could mean doubling or even tripling the domestic cultivation of hemp within a year or two.

According to a consumer report from November this year, 15% of adult Americans have tried CBD and 83% of them say that it helped, to some degree, with their conditions. These developments may help more adults access CBD oil at cheaper prices and on a more regular basis.

Hemp farmers will enjoy Federal benefits like other farmers

One of the greatest wins for hemp farmers under the 2018 Farm Bill is that the plant will be treated as any other agricultural commodities. While there are still provisions that still heavily regulate hemp production under this bill, hemp has become a mainstream crop after some changes were made to the existing provisions of the agricultural law to include hemp.

For instance, under section 11101, hemp farmers are included for protection under the Federal Crop Insurance Act which also allows them access to loans and financing. This means that insurance companies will be able to insure hemp plantations.

This will go a long way in assisting hemp farmers who normally have to face crop losses and other threats in the course of agricultural production. With climate change and more farmers starting to grow hemp instead of outdated crops such as tobacco, such protections will be crucial for the long-term sustainability of the hemp industry.

Times have changed both in the medical and public domain when it comes to how cannabis, more specifically hemp-derived CBD is viewed. For instance, preliminary studies show that CBD has a wide range of therapeutic effects for numerous medical conditions; ranging from cancer to irritable bowel syndrome and even anxiety.

Most notably, however, CBD has been shown to be highly effective in reducing the number of seizures in patients suffering from rare forms of epilepsy such as Dravet Syndrome. As a matter of fact, this year, the FDA approved a CBD-based treatment called Epidiolex for treating these seizures.

With all these benefits yet legal grey areas, consumers finding relief from hemp-derived CBD lived in limbo, wondering whether they were breaking the law or not. But now, whether your state had legalized cannabis use before or not, you can rest assured that CBD is legal even at the federal level- as long as it is from hemp.

The last Farm Bill in 2014 went to great lengths to generate and protect the research into hemp. The 2018 Bill continues this effort with section stipulations on hemp’s protection and conditions under which research has to be conducted.

The Bill extends research into hemp further by including the plant under Critical Agricultural Material Act. This provision is designed to recognize and consider the importance, diversity and opportunity of plants such as hemp and the products that can be extracted from them.

The Farm Bill does not have any repercussions on state-legal cannabis programs. Over the past three decades, 10 states have legalized cannabis for adult use while 33 have done so for medical purposes. All these facilities and programs are still illegal under Federal law with no exception.