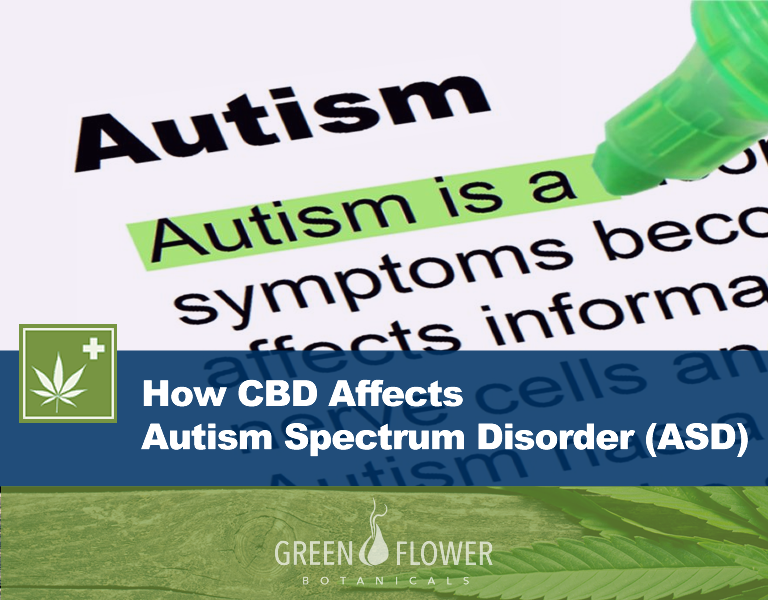 …some doctors have been paying attention to the huge and growing amount of anecdotal evidence that CBD, which is contained in cannabis and the hemp plant, is effectively easing the symptoms of autism in children with the condition.

Autism is a complicated condition that presents through various symptoms that differ from one patient to the next, and to varying degrees. According to the National Autistic Society of UK, autistic people have a different way of seeing, hearing and feeling the world compared to normal people. Therefore, autism is not a disease that can be “cured,” but rather managed, and most people with the condition regard it as an integral part of their identity.

The issue is that the existing treatment for autism is never straight-forward, which forces physicians and patients alike to look for other alternatives. Patients with autism try to control the condition using behavior modification therapies and special diets alongside antipsychotic medication. However, there is no one true cure for autism.

Recently, the use of cannabis to treat various symptoms caused by a wide range of illnesses has been gathering steam. However, the idea of cannabis as medicine is still equally complicated since there is still a lot that both scientists and the medical community does not understand about how it works.

Currently, scientists are still trying to figure out the full effects and role of the endocannabinoid system in our bodies. The research on how the active compounds in cannabis, namely, terpenes, CBD and THC relieve symptoms of people suffering from different conditions by interacting with this system has also been gathering steam over the years. Cannabis has been shown to help relieve various symptoms such as: easing the severity and episodes of seizures on patients with epilepsy, anxiety, treating glaucoma, blood pressure, etc.

Many patients have also reported an improvement of symptoms after treatment with cannabis for conditions that have not been well-researched, such as autism. A lot of patients, especially those with severe symptoms, either access medical marijuana legally in approved states, or illegally, in order to self-medicate and ease their suffering.

Currently, we are in a deadlock, where doctors are not willing to prescribe cannabis to treat children with autism, due to lack of sufficient clinical evidence to support its effectiveness and safety. On the other hand, the research is not there mostly because of the general fear of using children as test subjects due to the many active compounds in cannabis that preset various uncontrollable variables. Research is also minimal due to the tight control surrounding the possession and use of cannabis both in and outside the U.S.

However, even with the absence of empirical evidence, some doctors have been paying attention to the huge and growing amount of anecdotal evidence that CBD, which is contained in cannabis and the hemp plant, is effectively easing the symptoms of autism in children with the condition. Hemp is a plant of the same family cannabis. It does not contain psychoactive properties and it is legal in all states in the U.S. Before we delve deeper into that, let us look a bit more at this awful condition.

Autism, or Autism Spectrum Disorder (ASD), is a set of complex cognitive disorders that affect the normal development of the brain. As a spectrum, autism portrays itself differently from one patient to the next. Nevertheless, most patients showcase similar symptoms such as:

Other symptoms may include:

According to the Center for Disease Control and Prevention (CDC), approximately 1 in every 68 children in the U.S. suffer from some form of autistic spectrum disorder. This represents a tenfold increase in the diagnosis of the condition over just four decades. Furthermore, boys are 4-5 times more likely to develop the condition compared to girls.

Some children suffering from ASD may be diagnosed with an inability to learn, others, often known as “high-functioning,” perform excellently in music, mathematics and art. Generally, symptoms of autism reduce as the child gets older, in some cases, nonetheless, it develops into adulthood, and may result to self-harming habits.

What is the cause of autism?

For a very long time, both the medical and scientific communities had no idea what causes children to be autistic. Recent developments in research, however, has narrowed the search down to factors that affect a child during early brain development.

Scientists have noticed several rare gene mutations, some of which may act as a trigger, as well as a catalyst for autism. In most cases, the cause of autism is associated with a combination of different genetic, environmental and risk factors. Some of the risk factors include;

Alone, the risk factors do not lead to autism, however, together with genetic factors, the risks magnify. Current studies suggest that a woman may reduce the chances of her baby being born autistic by taking prenatal vitamins before and after conception, as well as eating foods reach in folic.

Autistic patients undergo a combination of therapies that aim to improve both their behavioral and social interactions. Both parents and doctors are very cautious when prescribing treatment for autistic patients due to safety and possible side effects since most of them are usually young.

Research suggests that children who get diagnosed early with ASD respond better to therapy. Early identification combined with the availability of a supportive family background have proven crucial to managing the condition. Due to the wide range of symptoms caused by autism, different therapies are designed to address all of them in order to improve the patient’s learning capabilities, attention span and social behaviors.

Some of the medications for autism include:

Over the years, there has been more and more anecdotal evidence that full spectrum CBD treatments are effective in treating children with severe forms of autism. In most of these cases, the patients do not respond to any therapies, forcing their parents to opt for more uncommon alternatives such as cannabis.

As a result, advocacy groups across the United States have been campaigning to have autism as one of the qualifying conditions for accessing the medicine in states where medical marijuana is legal. Some states such as Pennsylvania already allow autistic patients to manage their symptoms especially if the exhibit self-injurious behaviors or depression.

Due to the little empirical evidence in treating autism, however, children and parents are facing huge risks while treating their children with medical cannabis. This is because most of these cases involve self-medication which does not consider many things such as the strain, CBD and THC contents or the dosage.

CBD (cannabidiol) as an alternative treatment of Autism Spectrum Disorder

In the past recent years, more data has been trickling in as to how the endocannabinoid system is related to autistic disorders. Studies show that the regions of the brain which contain the highest amount of CB1 endocannabinoid receptors are the same that scientists assume cause dysfunction in patients with autism, that is, the hippocampus, the cerebellum and basal ganglia.

As the human fetus develops, the endocannabinoid system, including the CB1 receptors play an important role in crucial neurological processes, namely; axonal migration and neuron differentiation. Additionally, CB1 receptors also play a part in defining the position of synapses during early childhood development. This study suggests that activating CB1 receptors during infancy could have something to do with the onset of ASD.

In a 2013 animal test, researchers concluded that the endocannabinoid system may be impaired by, or involved in the development of autism. In another 2015 investigation, scientists concluded that when a chemical in the brain called anandamide activates the CB1 receptors of the endocannabinoid system, it controls the reward response system via social interactions. Scientists believe that insufficiency of some sort in this signaling system may contribute to the behavioral and social issues seen in autistic patients.

Parents with children suffering from severe autism have been speaking up with regards to cannabis’ effectiveness, especially varieties rich in CBD oil, in treating the condition.

One good example of how CBD oil is being used to treat autism is by Dr. Martinez, a clinical psychologist that runs a foundation that helps autistic children through surfing as therapy. He has been researching about how CBD oil affects autism and the results are looking good.

In one particular case, a child under treatment was able to speak his first words after being treated with hemp oil. After three weeks of treatment, the child improved significant language skills. Furthermore, Dr. Martinez records that initially, the child would get so frustrated with his ability to communicate that he would throw tantrums and harm himself sometimes. But now, he has not shown any signs of aggressiveness and he even laughs.

Another example is from Mieko Hester-Perez . She comes from a deep background of law enforcement to become an unlikely cannabis advocate after her son, Joey was diagnosed with autism. Later, Joey was diagnosed with Duchenne’s muscular dystrophy, a rare muscular disorder that has no cure. He was given 6 months to live. In the meantime, he was prescribed a slew of FDA-approved medication for his condition, which had loads of side effects and toxicity.

After a lot of research trying to reduce the 13 tablets her son had to take every day, Mieko came across medical cannabis and everything changed. After experimenting using edibles on her son, he soon began to make eye contact consistently, something difficult with autistic children. The edibles also improved his appetite and he added weight. After 6 years of the devastating diagnoses, Joey is living happily, and as sociable as any kid.

The famous author, Myung-Ok Lee also became vocal about how cannabis was a great alternative that has worked in treating her son who has autism. according to Lee, cannabis, more specifically the strain, White Russian which has a high CBD content has worked in easing her son’s pain and inflammation. Her case was investigated and published by Dr. Lester Grinspoon, an associate professor and emeritus for psychiatry at Harvard Medical School. Dr. Lester urges the medical community to start taking the anecdotal evidence more seriously.

Though slow, cannabis research with regards to autism is making steady strides. The latest developments come from Israel where scientists are currently conducting a double blind, placebo controlled clinical trial on children seeking to find the effects of CBD on autism alongside anecdotal contributors. The study is led by Dr. Adi Eran and it involves 120 autistic subjects ranging between 4-30 years of age. The subjects are being given cannabis oil without any intoxicating substances but rich in cannabidiol (CBD). This is the first quality investigation on how CBD affects autism, and patients, caregivers and the scientific communities are all waiting with bated breath to find out the results.

Every day, new evidence is trickling in helping researchers to understand more and more how CBD works in our brains. The potential of CBD to treat Autism continues to be supported by an ever-growing body of research. If you would like to read through the current research visit the Autism Spectrum Disorder page at Green Flower Botanicals.