Cannabis Terpenes and Their Effects Explained 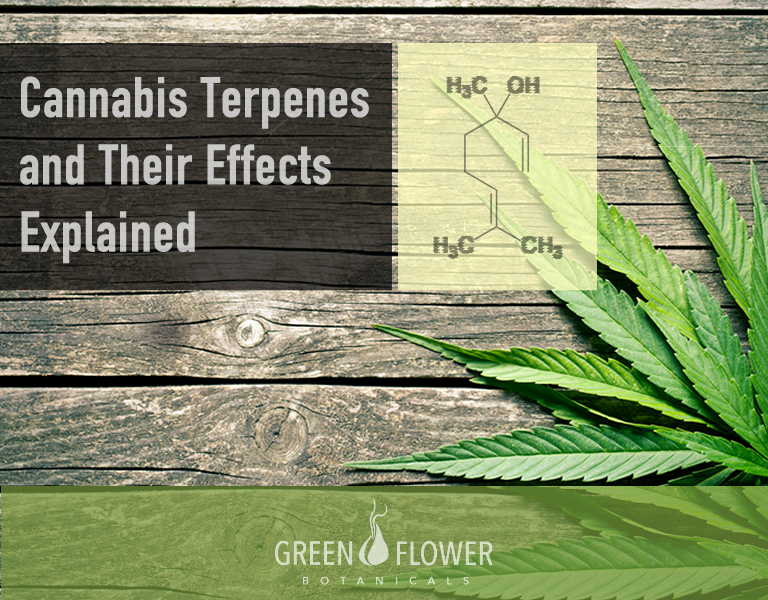 Cannabis Terpenes and Their Effects Explained

Anyone following cannabis science will know by now about terpenes. The media buzz is going mainstream, as well, as researchers test terpene profiles and cultivators manipulate the environment to maximize them. Terpenes are by no means a new discovery, however: Most plants have them and even some insects too. Terpenes end up processed into consumables, where they affect taste and flavor.

Cannabis plants also produce terpenes, and plenty of them. These tiny molecules dictate how different strains smell, taste, and even affect you. As with vegetables, for example, such as the bright red, uniquely distinct flavor of tomatoes, terpenes are responsible for a bud’s pungency and oral pleasantry, but these non-psychoactive compounds also have significant medicinal value.

This is the reason for the hype you see everywhere about terpenes. As studies reveal the benefits, effects, and role of terpenes in the complexities of cannabis plants, cultivators are mapping terpene profiles and manipulating them for specific tastes, smells, and even medical therapies. There are many, many different terpenes and combinations of them in most plants.

In cannabis plants, however, we know of several important ones already:

Limonene is a pungent, citrus terpene commonly found in Lemon Haze phenotypes. It smells and tastes delicious, but more importantly, it can help to prevent and treat cancer, relieve bronchial infections, and stimulate weight loss. Limonene penetrates the skin easily, making it ideal for pot-infused topical applications, such as oils, creams, and ointments made from limonene-rich cannabis strains.

Myrcene is a mildly fruity terpene identifiable by its earthy, musky flavor. It aids the “couchlock” commonly associated with Indica strains and, on its own, can act as a powerfully sedating muscle relaxant. It is also an effective anti-inflammatory, and according to the International Hemp Association, is present at high levels in most strains tested today. It is possibly the most common terpene.

You will know borneol by its camphor smell. As a terpene, it is among the most medically valuable in cannabis plants. It helps people sleep, and findings from various studies reveal the diversity of its properties: Borneol is an analgesic, a bronchodilator, and an antiseptic, and people use it to relieve symptoms of respiratory distress, such as coughing and mucus-congested airways.

Chamomile has famously high levels of alpha bisabolol. This terpene has a flowery smell sought after the world over. You can find it in many scented products, such as deodorant, powders, lotions, and even some perfumes. Alpha bisabolol is another anti-inflammatory, but this is what you use when you want an antibacterial. This terpene plays a crucial role in wound healing.

This is another flowery-smelling terpene, but it has a notably spicy flavor. Found in many, many plants, this particular anti-inflammatory has a distinctly recognizable aroma. Some linalool-rich plants include cinnamon, mint, and even some mushrooms. Scientists are particularly excited about linalool, as it has positive effects on neural function and can aid gross motor movement.

Delta 3 carene is another effective anti-inflammatory. This terpene has a pineapple-resembling flavor with an earthy aftertaste, and it is famous for its ability to regulate bodily fluids and dry tears, snotty noses, and even menstruation. For this reason, delta 3 carene is the terpene to have around if you have flu, and according to ongoing analysis, it is a common terpene present in many strains.

Camphene smells herbal. It has an herbal taste too. This terpene is an antibacterial with powerful infection-fighting properties. It is also an antibiotic and an anti-inflammatory most effective as a topical application. Scientists conducting laboratory testing are finding high concentrations of camphene in predominantly Indica marijuana strains.

Pinenes are instantly identifiable. They give pine trees their distant smell. Both alpha- and beta-pinenes are present in most strains of cannabis, and in many tests, scientists report in notable amounts. Both pinenes are anti-inflammatories, but they can also disinfect wounds and help the body cleanse itself of toxins. Many use cannabis pinenes to detoxify.

Found in eucalyptus trees, eucalyptol has an instantly recognizable smell. It is a widely used spice popular in many exotic dishes.  According to the U.S. National Library of Medicine, the pleasing aroma of this terpene ensure its addition to many products, including shampoos, body powders, mouthwashes, and cough medicines. Eucalyptol is a bronchodilator famous for its ability to ease breathing.

Terpineol is the terpene responsible for giving cloves their unique smell and taste. They are also mildly pine. In cannabis plants, terpineol is exclusive to Jack Herer strains and their phenotypes. This terpene is also unique in that it is one of the few antioxidants. It helps clear the body of toxic chemicals, free radicals, and other dangerous pollutants.

This terpene has a distinctly hops flavor, which is a plant cousin to cannabis. Caryophyllene influences mood and is extremely common in many cannabis strains. Soil-grown plants test higher for this terpene than hydroponically grown plants do, and science demonstrates its ability to calm the mind and relieve anxiety, depression, and other stress-related disorders.

Terpenes and the Environment

It is possible to manipulate terpene profiles by making simple environmental changes. Cultivators are growing strains for specific flavors, aromas, and effects. Low-stress growing techniques can increase terpene levels, as can horticultural molasses and some commercial products. Manipulating terpenes is an exact science, however, and one that scientists are still learning about at the molecular level.

More research is crucial. It is important to understand the full impact of terpenes on cannabis plants, and ultimately on how to maximize their beneficial effects. Strain mapping is the first step, and it is well underway already. Growers are selectively breeding strains for higher terpene concentrations and recording their results. The future of cultivation may well focus on terpene manipulation.

We are still learning about terpenes and have a long way to go yet. Mapping strains will help scientists identify them more and more, and producers are extracting them for CBD oil, hemp oil, and other products. As we understand how tetrahydrocannabinol, cannabidiol, terpenes, and other cannabinoid constituents aid human healing, the more the evidence supports the value of whole-plant medicine.

Author Bio – John Levy is a cannabis supporter and a blogger by profession. He is currently working with Pot Valet – a leading company to provide online cannabis delivery service in Santa Monica. In the past, John has extensively written about marijuana and it’s effects. You can follow his company on Facebook, Twitter and Google Plus.