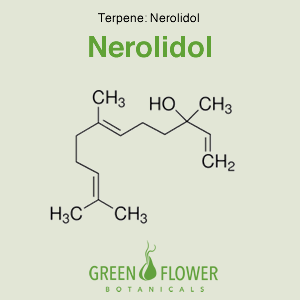 Nerolidol, also known as peruviol, is a naturally occurring sesquiterpene found in the essential oils of many types of plants and flowers. There are two isomers of nerolidol, cis and trans, which differ in the geometry about the central double bond. Nerolidol smells similar to fresh bark.  The terpene has been alluded to be a toxin against harmful protozoa like malaria and leishmaniasis. Furthermore, nerolidol is effective in delivering drugs through the skin.

Nerolidol has been shown to help the passive skin penetration enhancement, helping a model hydrophobic permeant increase its absorption into skin by 20 fold. There were also significantly longer durations of action and did not wash off easily.

The research on nerolidol has concluded it to be a potent malaria drug. 100 microg/mL of nerolidol caused 100% of growth inhibition of young trophozoite to schizont stage after 48 hours of exposure. Nerolidol had an inhibitory effect on the biosynthesis of the isoprenic and dolichol side chains of the benzoquinon ring of ubiquinones in the organism. Thus the expression of p21 ras protein was significantly decreased.

Nerolidol has been proven to be effective with Leishmaniasis as well. 57-85 uM was proven to be effective as a 50% growth inhibitory concentration in a broad range of Leishmania species.100uM resulted in 95% reduction in infection rates of macrophages. The compound inhibits the mevalonate pathway. The compound inhibits isoprenoid synthesis by reducing the incorporation of mevalonic acid or acetic acid precursors into dolichol, ergosterol, and ubiquinone. This compound’s effect can be attributed to the blockage of an early step in the mevalonate pathway.