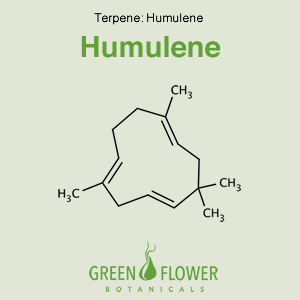 Humulene is one of the main terpenes in hops, from where it derives its name. Humulene is also called alpha-caryophyllene. Like beta-caryophyllene, humulene is a cannabinoid and sesquiterpene, although it does not contain a cyclobutane ring. Humulene is a powerful anti-inflammatory and an anti-pain compound. It also has anti-cancer properties. Humulene is unique because, like THCv, it acts as an appetite suppressant, showing promise for weight loss treatments.

The antibacterial activity of basal fir oil (Abies balsamea) seen to be effective with Staphylococcus aureus. At 2.6 microg/mL, humulene was shown to have a minimum inhibitory concentration, the most potent of all the terpenes evaluated in the study.

Humulene was elucidated to be potent against several solid tumor cell lines. The molecular mechanism involves producing reactive oxygen species, or free radicals, and depleting natural antioxidants in the cells. Humulene was also shown to work synergistically with beta-caryophyllene in delivering the molecule to cancer cells, thus increasing the cytotoxicity of humulene on several cancer cell lines.